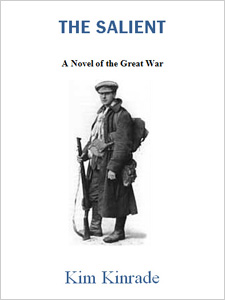 In the autumn of 1914, the small British Expeditionary Force had rebounded from its retreat in the face of the heavily-numbered German Army and set up a line of defences outside a town in the Flanders region of Belgium called Ypres."Wipers," as the “Tommies” called the place, was where the British finally denied the German juggernaut’s bid for the English Channel ports.  This monumental defence was undertaken under the most horrific artillery bombardment the world had yet seen. The frustrated the German emperor, Kaiser Wilhelm, dubbed the crack British riflemen  "that contemptible little army."

In the spring of 1915 there was another battle at Ypres, one that would pit another small army against the Kaiser's hordes.  This time, however, the German army strode behind a most sinister weapon - poisonous gas.  It was the first use of gas and it set the stage for the fighting that went on for the rest of the war.

This small army was from Canada, the first of the Commonwealth countries to answer the call from King George V.  The Canadian First Division was made up of Canadian pioneers, American volunteers and British ex-patriots. More than a few of the Brits had seen action in South Africa and the Sudan and melded their army traditions with the pioneer spirit they had garnered in North America.  The tenacious stand of the Canadian First Division in April of 1915, amidst the clouds of chlorine gas, surpassed even the feat of the "old contemptibles" the previous fall.  Called Canada's "Thermopylae" they held the Germans back until British reinforcements could arrive and solidify the line.  Afterward, Lieutenant-General Horace Smith-Dorrien, the commander of the British Second Army, gratefully acknowledged that the Canadian division had prevented "one of the worst disasters in British military history."

The Salient: A Novel of the Great War, is the story of Charlie Cashin, a twelve year-old immigrant to Canada from the Isle of Man - a British island in the Irish Sea - who settles in Trail, B.C as a painter for the smelter operation there. At seventeen, he joins the fledgling Canadian army and accompanies them in their odyssey from training in Canada and England to their baptism of fire at Ypres, Belgium. Along the way he overcomes his own fears and grows into a seasoned soldier and meets many famous Canadian personages including Captain John McCrae, the writer of In Flanders Fields.

Available for purchase at Amazon